The following is a chart of JavaScript Pseudo Classical Inheritance.  The constructor Foo is just a class name for an imaginary class.  The foo object is an instance of Foo. 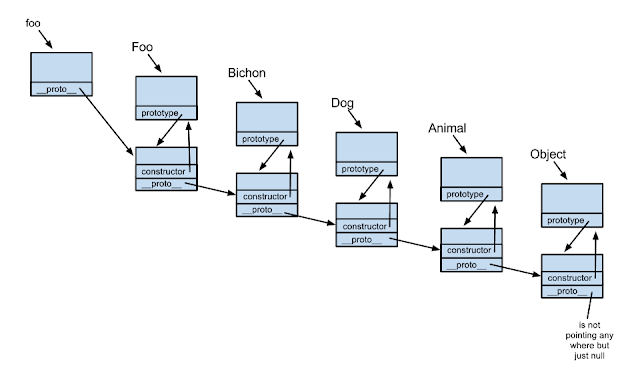 And now we can see from the diagram why when we inherit Dog from Animal, we would do:

(Note: with the introduction of Object.create(), it can also be done this way:


Note that we can use an empty function F() to set up the above relationship as well:

Because Animal() may take a longer time or more complex logic to run, and it can also create properties in that new object that we don't need.  A way to set up the Dog.__proto__ to point at Animal.prototype is what we need, and F() can already accomplish that.

If there are 3 Dog instances, they would point to the middle of that long prototype chain.  It is still a complete prototype chain, but a shorter one: 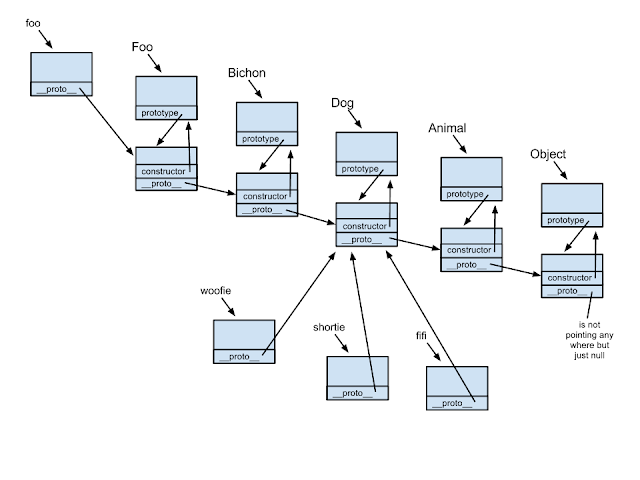 Now we can understand why when we add a method to the Animal class, we would use

That's because when we say

If woofie the object doesn't have the move method, it will go up the prototype chain, just like any prototypal inheritance scenario, first to the object pointed to by woofie.__proto__, which is the same as the object that Dog.prototype refers to.  If the method move is not a property of that object (meaning that the Dog class doesn't have a method move), go up one level in the prototype chain, which is woofie.__proto__.__proto__, or the same as Animal.prototype.  Remember we already did

earlier, and so now move is found, and the method can be invoked.

Note that in reality, each constructor function has a __proto__ property as well, and if the Function constructor is also shown here,  a more complete picture is: 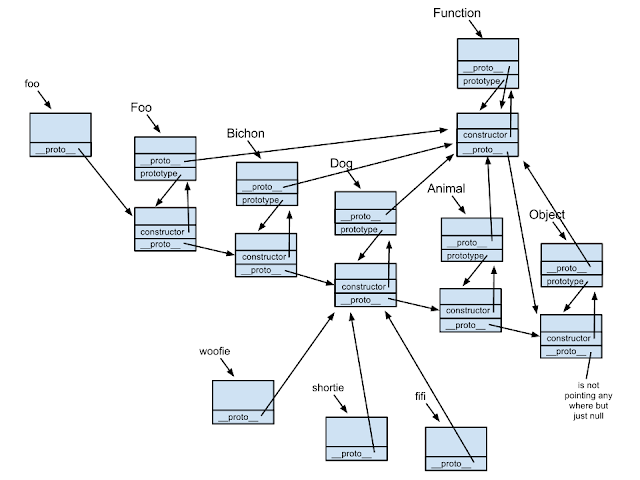 Even though foo.constructor === Foo, the constructor property is not foo's own property.  It is actually obtained by going up the prototype chain, to where foo.__proto__ is pointing at.  The same is for Function.constructor.  The diagram can be complicated, and sometimes confusing when we see Constructor.prototype, foo.__proto__, Foo.prototype.constructor.  Note that Firefox, Chrome, Safari, and node.js support __proto__, but IE doesn't support it, and it can be obtained by Object.getPrototypeOf(foo).  (IE 9 or above is needed.  Before IE 9, it can be defined as in John Resig's post, and it requires that the constructor property is set properly.)  To verify the diagram, note that even though foo.constructor will show a value, the property constructor is not foo's own property, but is obtained by following up the prototype chain, as foo.hasOwnProperty("constructor") can tell.